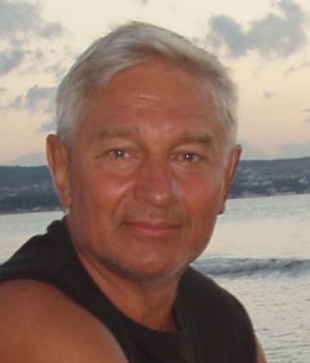 I, Viktor Sergeyevich Boyko, Russian (after my mother, although I could have been registered as Ukrainian, after my father, when receiving my passport) was born on April 1, 1948, in the village of IchkI (Sovetskoye) in the Crimean Region.

From 1950 to 1967, I lived and went to school in Simferopol, graduated from ten-year school No 3, then from the Industrial and Civil Engineering Department of Railway Technical School. From 1967 to 1969, I served in the military as a radio operator. In 1970, I enrolled in Simferopol branch of Sevastopol Instrument-Making Institute and graduated as a civil engineer. In 1975–1978, I worked, on a job assignment, in Evpatoria (at the all-union top-priority construction site of the pioneer camp “Young Leninist”). Since 1978, I have been living in Moscow. Until 1999 inclusively, I worked in the Central Scientific Research and Experimental Design Institute for Engineering Equipment, named after B. Mezentsev, as a leading engineer.

Since 1993 and up to this day, I am the head of the School of Yoga named after me.

I first came to know about Yoga from Razor’s Edge (1964), a novel by I.A. Efremov. But I started my personal practice only in 1971 using B.K.S. Iyengar’s book Yoga Dipika. During the first few years, I continued my regular practice of asanas along with searching and studying of the available literature, and also communicating with numerous Yoga enthusiasts from Crimea and Ukraine. Being naturally solidly built, I had really poor flexibility from my childhood, and therefore, despite the rigorous discipline, during the five years of my Institute studies, I failed to achieve hypermobility even remotely similar to that of Iyengar; and more than that, I realized that for me it was totally unachievable. This failure made me, on one hand, thoroughly examine my actions, and on the other hand, go deep into the original text. Besides that, I had to appeal to P.K. Anokhin’s theory of functional systems, biofeedback, biomechanics and movement physiology, history of the highest achievements in sports, oriental philosophical systems and their practical applications, etc.

Gradually, as my experience grew, I came to realize the essence of Hatha Yoga, relying on the information from Patanjali’s Yoga Sutras. Having corrected my approach to practice, I achieved a lot more interesting results than mere acrobatics could produce; and when the quality of practice had reached a certain point, people with health problems began to appear in my milieu. It remains unclear why this happened, maybe such a course of events was spurred by our initial experience obtained from 1972 to 1975, when my classmate Boris Yuganov and I started our sadhana. Suffering from chronic cholecystitis, 19 year old Boris was an emaciated, icteric, hypochondriac person, but after three years of Yoga practice and having successfully graduated from the Institute, he passed medical examination with excellent results, was found completely fit, then served in the military in Karakum desert and forgot about his liver problems forever. And somehow, I began specializing mainly in therapy.

Having settled in Moscow, I attempted to find people and places, where one could seriously study Yoga, but my search was in vain. In the Institute of Medical and Biological Problems named after O. Gazenko (IMBP), after examination I was told that I could be accepted as a test subject, but I regarded trading in health as folly; and it proved impossible to fight through to the Space Research Organization. While getting acquainted with yogic circles of Moscow, I happened to visit the laboratory “on Furmanny Lane” where I was introduced to Mr. Spirkin. Later on, I communicated for a good while with G.S. Shatalova and Y.I. Koltunov, the Head of the Informal Association “Kosmos”. In a school gym near “Fili” metro station, I attended two training sessions by a middle-aged brown-haired man with a steady gaze – this was Statsenko, the would-be “guru” Ar Santem.

By the beginning of the 1980s, Yoga was forbidden in the USSR for ideological reasons, and I worked with people illegally, for my own pleasure and out of pure interest, not thinking that other possibilities might arise one day. In 1985 I was filmed in a short movie “The Burning Mysteries of the Century”, shown as a newsreel later on. I taught Yoga to composer AlekseI Rybnikov and Okudzhava’s relatives, to professional sportsmen and party officials, while still working in my research institute and sharing my spare time between my family and Yoga. In 1987, I established cooperation with the All-Union Center for Vegetative Pathology (Moscow, Rossolimo Street), headed in those days by Professor A.M. Vein. I also had close interaction with the Laboratory of Physiology at Nervous Pathology Clinic and with its Head Ion Moldovanu (at present the Physician-in-Chief of Kisineu). They examined me during practice using the Center’s equipment, and besides that, gave me an opportunity to apply Yoga to various types of neurotic patients.

In 1989, the First All-Union Yoga Conference was held in Moscow, and B.K.S. Iyengar was among the invitees; thus after 18 years, I happened to meet my idol and my first remote guru. I was 41 then, but, evidently, a certain result of practice was obvious, since during demonstration classes GurujI selected me out of some three hundred people to demonstrate asana technique. Then Iyengar visited me at my place and presented me with the original of the same very book we used to learn Yoga in 1971. Commemorative inscription on the book says: “I wish you have an ashram of your own”.

Later, he sent Yelena Fedotova and me invitations to a one-month course in Pune (RamamаnI Iyengar Memorial Yoga Institute), but it was useless for me, since by that time my understanding of the techniques had fully shaped, and I saw how different it was from Iyengar-Yoga.

In 1989, a Yoga group was opened at the J. Nehru Cultural Center (at the Embassy of the Republic of India), directed by the first Yoga master in Russia Lakshman Kumar. In 1991, on the initiative of the Embassy Secretary Mr. Ganguli, eleven most successful students were selected, and after a one-month course of intensive study, Yoga Teaching Сertificates, signed by Mr. Gonsalves (Indian Ambassador in the USSR), were ussued for them. This still remains an unprecedented case. These eleven included A. Lappa, R. Amelin, K. Danilchenko, V. Fentisov, B. Arion and the present author. This happened on July 31, 1991.

By an interesting coincidence, on that very day, Tikhvinsky Executive Committee of People’s Deputies Council registered a small enterprise Center “Classical Yoga” with four founders: Viktor Boyko as Director, Boris Martynov as Sanskrit translator and chief accountant, Roman Amelin as musician and English language expert, and also a programmer Konstantin Danilchenko. We were located at the Research Institute of Physical Culture. This was the first official organization in the USSR, which contained the word “Yoga” in the title.

The center engaged in active work: workshops in Moscow area (“Aksakovo”, “Beryozovaya Roshcha”) were held, and a series of publications on practical applications of Yoga came out (see library on this website). There were field seminars as well – in Irkutsk, Yekaterinburg, Kustanay, Yaroslavl, Chernigov, Sevastopol, Novosibirsk, Chelyabinsk and other cities.

During that period of time, I met Professor V.V. Brodov, Ye. Fedotova, Ye. Ulmasbayeva, Yu. Belous, Ochapovsky, Svendrovsky, Polkovnikov, Golembo and many others, who were somehow related to Yoga.

In 1993 Roman Amelin abandoned us, and by 1996 the Center actually ceased to function, because K. Danilchenko digressed to Sufism, while B. Martynov started implementing his own publishing program (which was almost completed by 2006).

This ancient practice provides almost everyone with resources for disease prevention, physical and spiritual health improvement. On this web portal, you can get an idea about the fundamentals of classical Yoga techniques, as well as documentary information on its history in Russia, the USSR, and the CIS.

As the fathers of the Church used to say, the truth may manifest itself at any point of time and space, there are no privileged places for it, there is no need to wander around the world in search of a guru; but it is necessary to discern available quality information, to think and to act efficiently. After some time of practicing, everyone will naturally understand what Yoga is, and what one can expect from it. Here, I offer my own vast experience to all those interested, who can use it, thus saving their time, which means life.